Last night was a full moon. It’s a poor time to look at other stars because the bright reflected sunlight form the moon overwhelms the dimer light from distant stars.

Full moons are traditionally associated with an inability to sleep, insanity, hence the term lunacy, and various magical phenomena. The British Medical Journal published a study in 2000 on dog bit admissions to hospitals in England. They found that dog bites were twice as common during a full moon. K9’s obviously are very influenced by the lunar cycle!

Most Hindu festivals are celebrated on days with a full moon night.

All full moons rise at sunset.

It is in synchronous rotation with the Earth, which means we ALWAYS see the same face.

Contrary to belief it was the Soviets that first saw the far side with Luna 3 in 1959. And it’s not the dark side as it is illuminated once a day. Pink Floyd would be very upset! 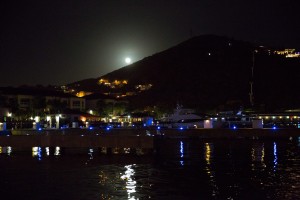 Stop Press – Dog bites are worse during a full moon!