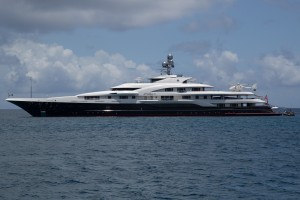 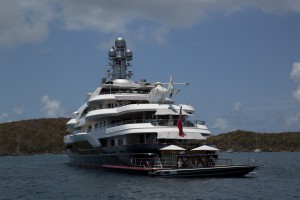 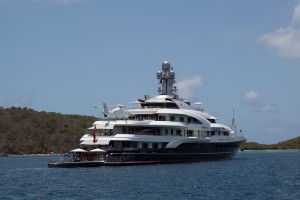 Superyacht Attessa IV was at anchor yesterday off Christmas Cove, Great St James Island, St Thomas. It comes complete with it’s own Eurocopter which is stowed on the stern. It’s unusual to see such a large superyacht in the Caribbean in June, normally yachts of this size have already made an Atlantic crossing to be in the Mediterranean for the summer months. Attessa IV is looking great and the crew were working very hard.

Yacht vital statistics: 328 ft (100m). She was built by Evergreen Shipyard in Japan at their Nagasaki shipyard, and delivered to her owner in 1999. In 2007 she had a 3.5 year refit by Washington Yachting Group. She was previously named Evergreen.

Her Owner is Dennis Washington with an estimated net worth of $5.8 billion, mostly from Copper Mining in Montana. He is a self made man, he started with one bulldozer aged 30 years. In 5 years he was the biggest contractor in Montana. The yachts value is estimated at $250 million which doesn’t include the helicopter!

Stop Press – Dog bites are worse during a full moon!
Scroll to top